Fishguard and Goodwick are small hill top and harbour twin town in North Pembrokeshire. Both steeped in history going back to the Old Norse fishing traps on the Goodwick sands where the name Fishguard originates. The Welsh name for Fishguard, Abergwaun comes from the mouth of the river Gwuan, which runs through the Gwaun Valley.

Important historical events from the towns include the Battle of Fishguard or the 'Last Invasion' of mainland Britain. The French side was overcome by mutiny and hostility from the famous Welsh women organised by Jemima Nicholas. The brief two day campaign end in February 1797 at the Royal Oak pub when they surrendered.

The area is also know for smuggling synonymous with seaside towns and surrounding sea caves. Another infamous association is the filming location for Dylan Thomas', Under Milk Wood at Lower Town. 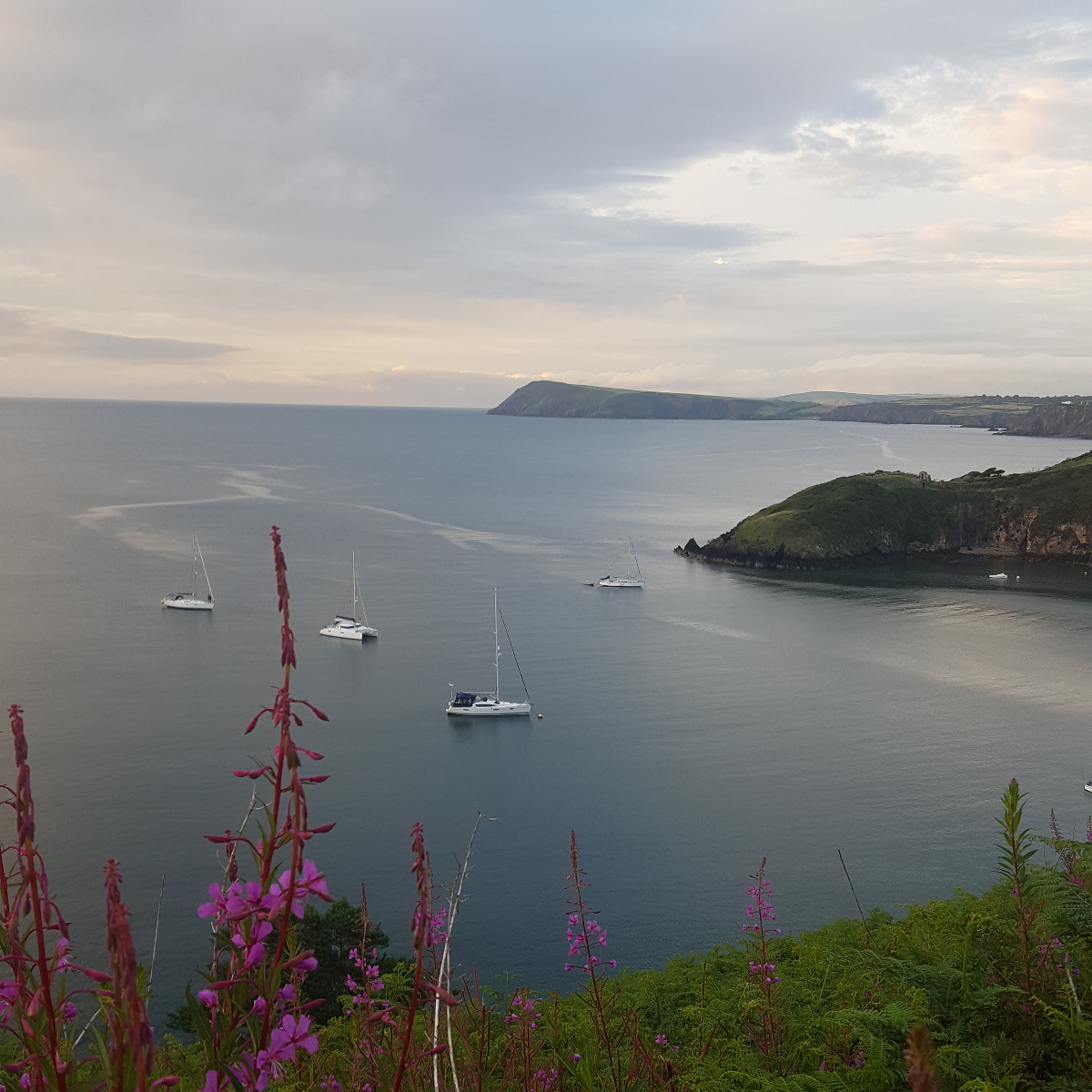 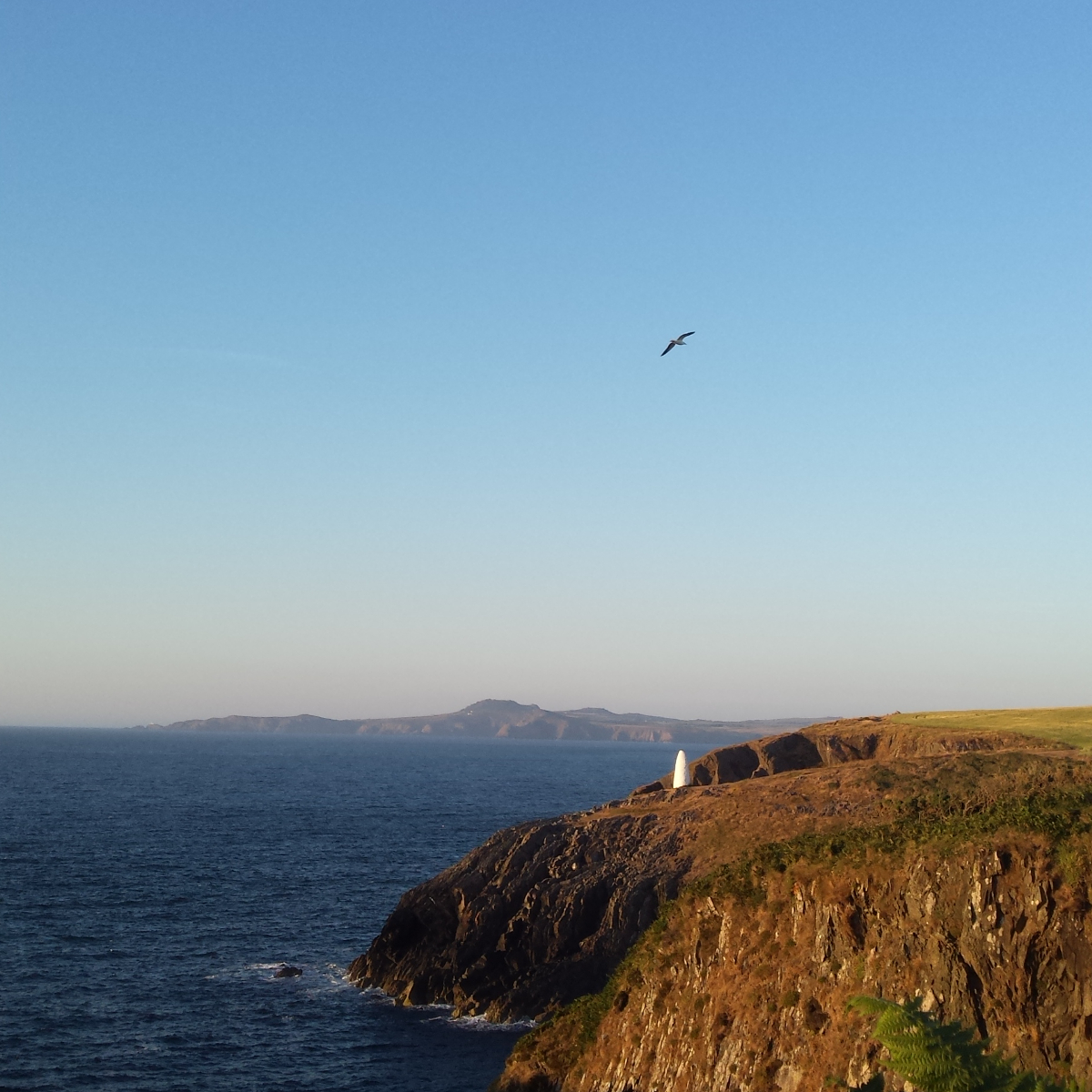 At Glasfryn Escapes campsite we are mere minutes from the exquisite Pembrokeshire Coast National Park for you to enjoy. It can be sampled by walking any of it’s 186 miles, encompassing sheer cliffs, secluded bays and amazing beaches.

The coast path can be picked up in either direction. From Lower Fishguard heading North around Dinas Head passing Pwllgwaelod. Alternatively making your way South/Westerly from Harbour Village above Goodwick towards Strumble Head lighthouse.

We think that some of the best ways to experience the National Park is to be ‘IN’ it and ‘ON’ it! Celtic Quest Coasteering offer award winning coasteering from the unique Abereiddi beach (only 12 miles from Fishguard). Celtic Quest offer an unrivalled coastal exploration experience for guests of all and any ability exploring rocks, caves, waves and jumps. They also give the opportunity for you to sample the Blue Lagoon (Llyn Glas). The Red Bull Cliff Diving World Series have previously held diving competitions here. 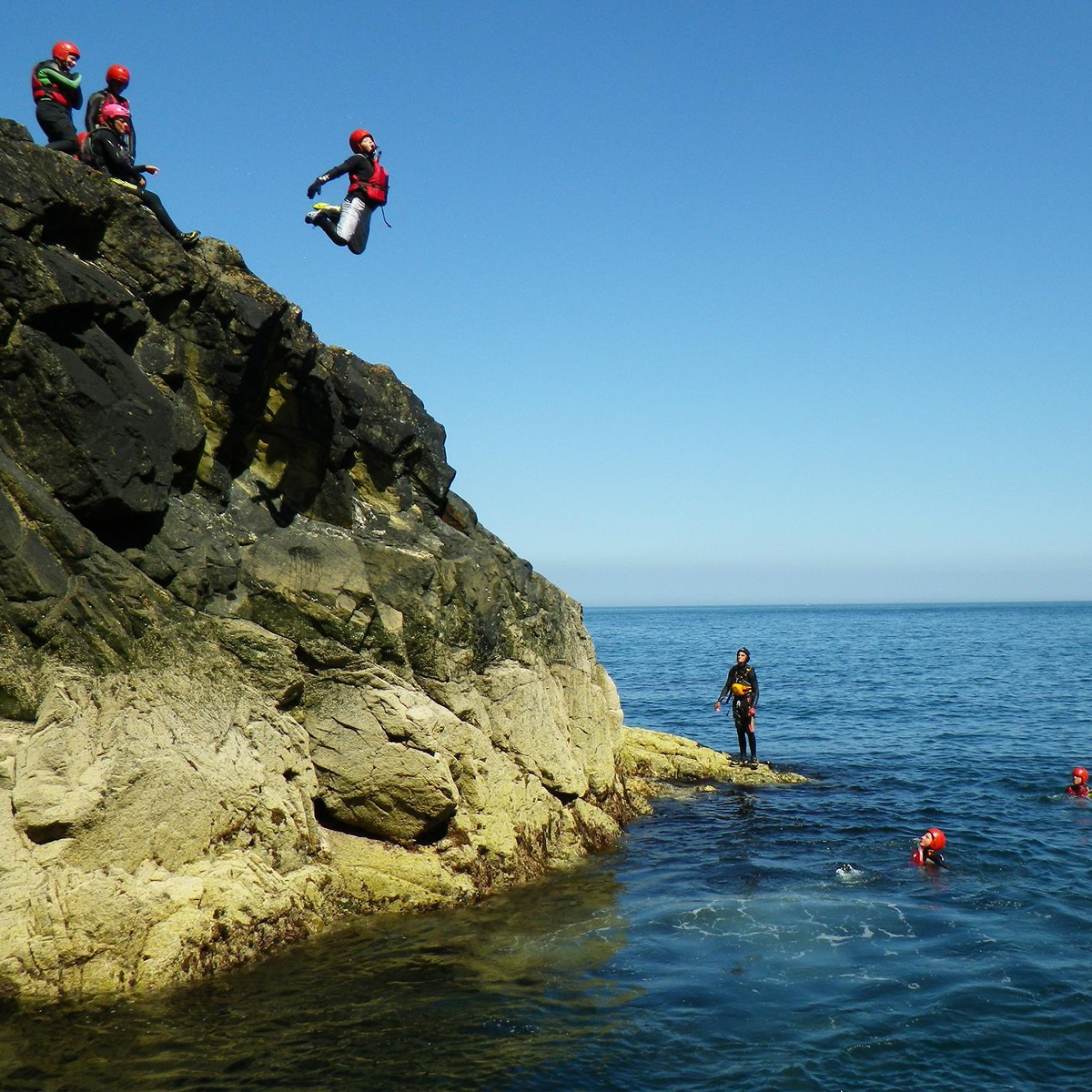 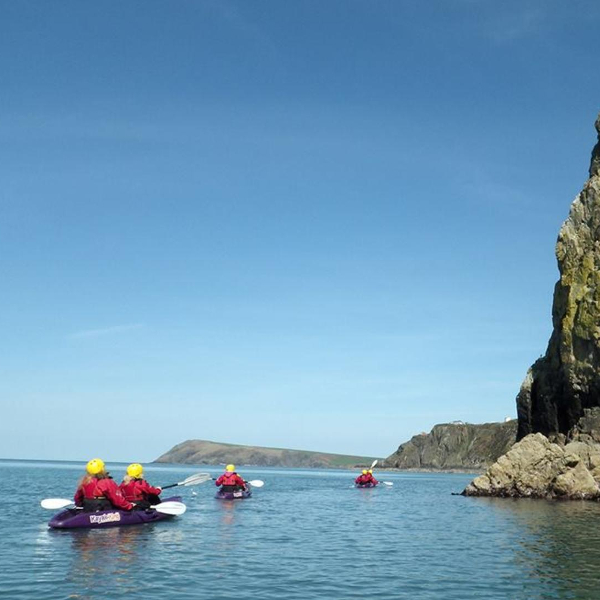 At the old quay down in Lower Town Fishguard, the Kayak-King can show you the secret bays and caves along the coast from sea level. Your trip will surround you with scenes you can only get from a kayak, all with the safety of a highly experienced team of friendly guides. You may even come up close and personal with some Pembrokeshire wildlife like spider crabs, seals and a plethora of sea birds.

Board Games Surfing, it’s in the name! Libby can put together fantastically fun sessions for you on boards. This could be learning the basics of surfing. You could be stand up and catch your first waves at Newgale in no time. Or getting to your feet (or knees) on a Stand Up Paddle board (SUP) to search the tranquil sights and sounds of Fishguard Bay. 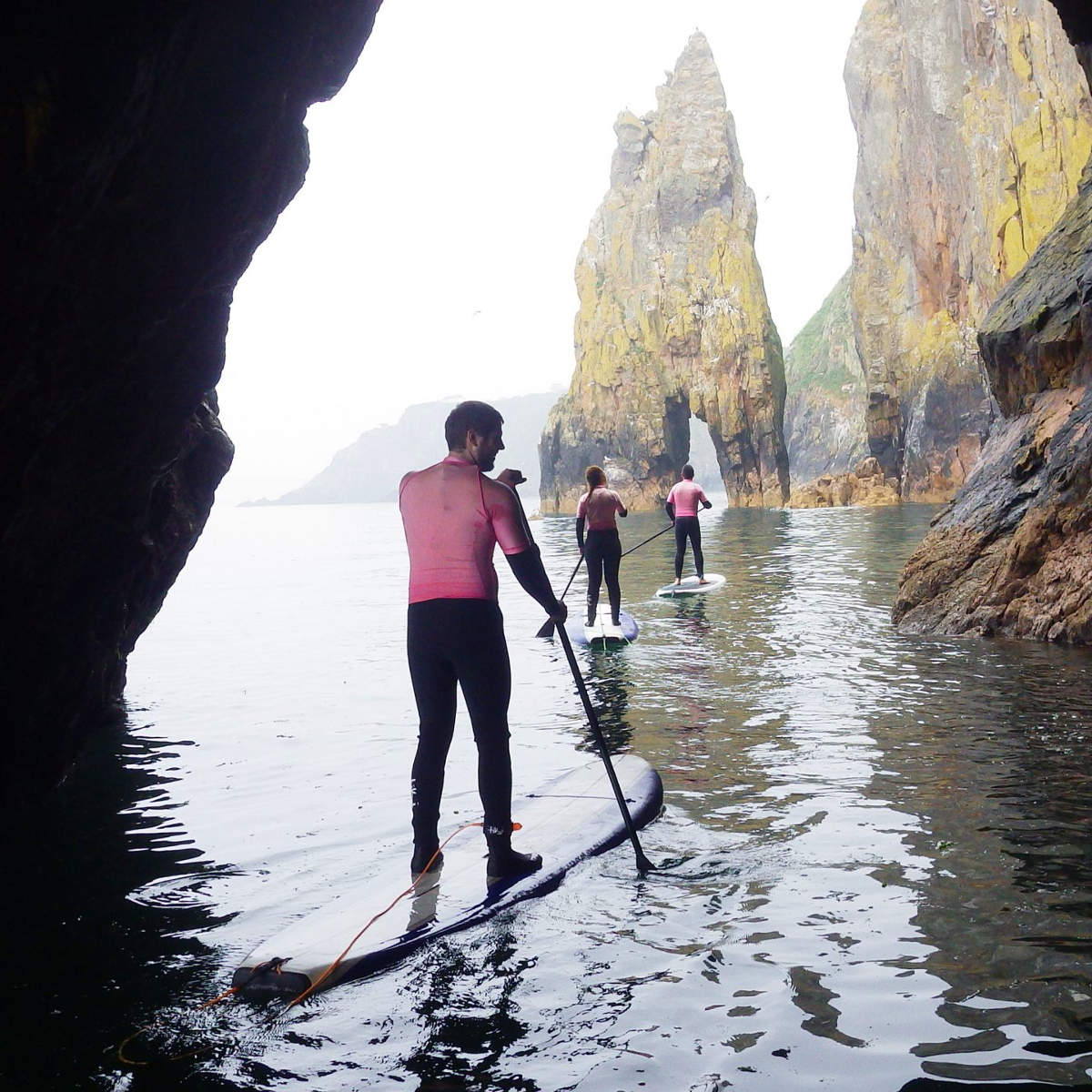 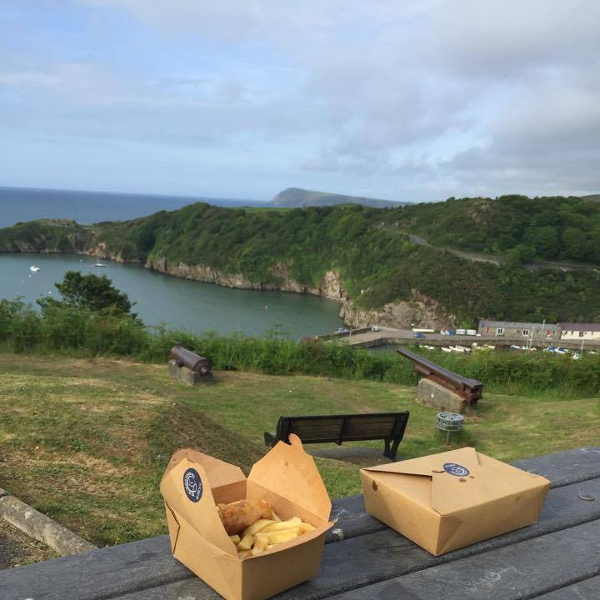 Fish and chips are a must have for any seaside holiday. Hooked at 31 are an award winning take-away in Fishguard serving up some of the best fish and chips in the Pembrokeshire. With plenty of selection everyone is sure to be happy. They also have a selection of homemade ice-creams available. Head up the road to enjoy the from the view point over looking Lower Town.

Pembrokeshire is dotted with cafes and pubs for to explore and refuel after a day at the beach or on the coast path. Fishguard and Goodwick have plenty of choice for breakfasts, teas, coffees and evening meals. The try the famous Royal Oak pub on the square for a great beer garden and pub grub and don't forget our onsite offering at Glasfryn Escapes, Red Onion Garden Cafe serving up freshly baked cakes and light lunches.

The towns of Fishguard and Goodwick have some gems worth seeking. So if there is anything specific you would like to; know, see, do or experience while on your holiday please get in touch. With local knowledge we can point you in the right direction. We can help provide information and help organise your trip, so you can make the most out of your stay with us.